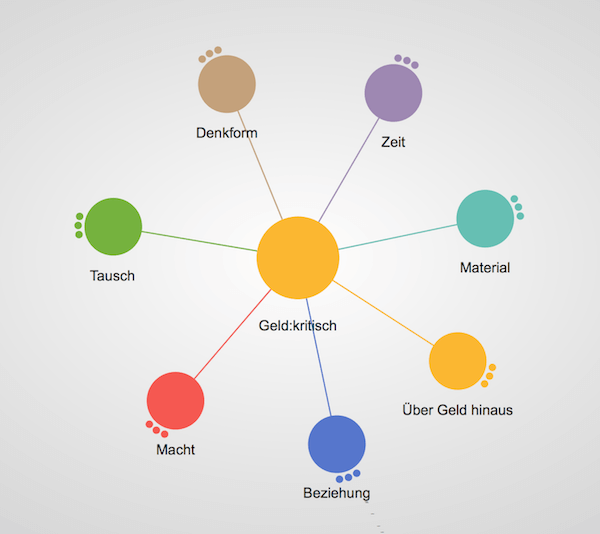 In this rubric we explore some aspects of money that we think are vitally important. What is money, actually? How does it manage the trick, in one way or another, of representing value, worth? What transforms a bone, a coin, a piece of paper, a password or a fingerprint into an exchangeable surrogate of value? What is money, we have to seriously ask, as an idea?

Food and precious objects were used as a means of payment for many centuries before also being employed to make purchases. This use of money in today’s sense only took hold in the modern age. And from that moment on, money began to dematerialize, lately becoming mere bits of data..

Money originally was not what we think of today as money. In archaic times payments were made to satisfy an obligation, whether a debt or a wrongdoing. Many things could be used for payments. Archaic payments are indeed the origin of our money but they are far from being the same as our money.

Before coins were minted, lumps and bars of precious metals, among many other things, were used as objects of payment. With coins, all these objects of payment acquired a standard. Only then did they also become a medium of exchange.

From the moment a society bases its economy on money, the value of money no longer needs its substance. Money’s value comes from the fact that it can be exchanged to purchase goods of the same value. Monetary value consists solely in this function.

Money as we know it is a late historical phenomenon.Where it takes hold, a society’s total life processes depend on it and time as a whole is devoted to serving one blank purpose: money must continue to function like money, and it must always increase.

The genesis of modern money

For centuries, the early forms of money remained secondary as the provisioning of life’s necessities was based on self-sufficiency, or by the distribution of goods by the powerful. That changed in the course of the 16th century with the emergence of the capitalist economy. In this system, the entire provisioning of society depends on money.

In a society where people depend primarily on money for their livelihoods, they have to get more money for what they do than they expend on doing it. This necessity alone drives the inexorable compulsion of money to become more money.

More money, more prosperity for all: This promise, seemingly inherent in money, is not being fulfilled. Even if an occasional pauper strikes it rich, overall, as time goes by, the poor grow poorer and the rich richer. Money’s continuing usage is based on its function as capital: the more money that’s invested, the more it can yield.

Money is power, the power to control the work of others. But behind that power  – recognized in every bank note, every coin and every entry in a bank account – stands yet another power: states with their monopoly on force guaranteeing the money.

Property doesn’t fundamentally mean the exclusion of others. There are inclusive and exclusive forms of ownership, with very different consequences for people’s interactions with each other and with nature. Our money imposes a private ownership that rigorously excludes everyone from everything they haven’t paid money for.

All over the world people are compelled to sell something in order to get money that they need for living. Basically what most people have to sell is their labour and this is put to use to produce merchandise. Where things are produced in this way, those who buy with money appropriate control over the work of the others.

No coin, no bill, no number on an account can force anyone to use them as money. It is governments that impose and maintain this compulsion. The states themselves depend on money, and want as much of it as possible to be generated in their own currency.

Money establishes a relationship between people as buyers and sellers of goods. While everything economic is determined by money, this abstract relationship with money does more than shape people’s social context; it also affects personal relationships to their very core.

Money benchmarks everyone as an individual owner of money, and at the same time it positions the individual within the anonymous universe of all other people as money owners. This abstract reference forms a distinct instance of the “I” in everyone as a conceptually pure form of self. Accordingly the “I” as a psychological entity arose only in the modern era, under the reign of money.

Every person must make or do something so that others will give him money. But he doesn’t exert himself for them because he knows them, and they don’t pay him money because they want to contribute to his livelihood; rather everyone seeks his own ways of coming into money. A group so formed is not a community but an interrelation determined by money.

The world as environment

With the advent of modern capitalistic money, the world becomes an environment. The self-referential monetized individual sees itself as a singular interior element surrounded by an all-encompassing exterior. And so it is that monetized individuals regards the world as a mere externality, as if they themselves would not belong to it.

Presentation Eske Bockelmann: "Money as a way of thinking? – It is the key to understanding what money does to us – and what it does to the world.

Money forms people’s thinking by forcing them in various ways to be steered by money. Yet it also imposes certain ways of unconsciously thinking on people. In the modern age, money influences a lot in this way, no less than the natural sciences and philosophy.

Money requires everyone to think of goods as both the respective thing itself and its monetary value, that is, purely quantitatively. This results in a way of thinking which also induces a new way of calculating. Unlike all earlier forms of mathematics, this new form deals with pure numbers, calculating mathematical function.

Prompted by the money-mediated society, the notion arises of a world split into subject and object. Descartes was the first to formulate this then-new notion at the beginning of the 17th century. It implies the world is split into the determining, money, as subject and that which it determines, the commodity, as object.

The acts of exchange that people practice, and upon which their societies are originally based, are only turned into barter in the form of buying and selling through money. Thus, in the end, the market dominates every exchange. Besides the market, methods of exchange persist in the form of offerings.

Because money functions as exchange medium today, it is generally thought to have originated in barter transactions – mistakenly. In communities that have no money in the modern sense, the presentation of gifts is crucially important. The gifts are not swaps; rather, along with other customs, they confirm and reaffirm a basic bond people have with one another.

Buying changes ownership of money and goods from one person to another. If the trade is completed, every obligation between the participants is fulfilled and, so, the interaction ends. Buying replaces the all-encompassing social bond with one single obligation: to pay something to someone. Thus buying is both obligatory liquidation and the liquidation of the obligation.

Long before “the market” became a byword, there were only local markets, strictly limited in terms of time and in their range of goods. A coherent market with a common pricing structure only emerges towards the end of the 16th century in Europe. This development gave the market economy its name and coincided with the transformation of money into the universal medium of exchange.

Economies without money – how should that work? We also don’t know. But we do want to think about it. People do things, give each other gifts, share what they have, help each other and contribute to the success of enterprises large and small – without money. They did it earlier and they do it today. And what does the future look like?

Most considerations about the difficulties that money provokes are directed to the money itself: money should be crisis-free. Accordingly, in their thoughts they construct a kind of money that ignores certain disadvantages and limits itself to its benefits. Other approaches use alternative forms of money circulation, underneath the reign of world money, that deviate in tangible ways from its logic.

The commons movement counters money-mediated provisioning with collective participation in the activities and basic concerns of provisioning such as ownership. The movement’s core conviction is that, to avoid money’s built-in constraints, only the community can decide on its common endeavours.

What the people live from and how they distribute it ought to be organised fundamentally differently than it is with money. And if highly segmented divisions of labour shall persist, a return to older forms of subsistence can be excluded. The extremely elevated capacity of people pressured by money to produce more with less effort and to distribute their products more precisely than ever would doubtless be useful – just organized differently than it is with money.